The problems faced by America and other nations around the world are extremely easy to solve. The challenge is in awakening the people to what is being done to them. This is more difficult and can only be accomplished by individual initiative and action. In a world of mass censorship, rapidly approaching totalitarian rule and consolidation of media in the hands of a few, indivdual initiative is more important than ever.  Putting an end to the Zionist plot for world government requires removing the foundational elements of it.  Spiritual problems can not be solved with political solutions.   The attacks on all nations and establishment of world government are spiritual in nature.   The underlying purpose is the establishment of a single world religion.   This is why this plan continues unfolding generation after generation, no matter who comes and goes.Those working to build it are simply useful idiots, being used and discarded. Even those at the highest levels, who imagine they will obtain limitless power, will in the end receive nothing and their reward will be death.  There are many sites which explain the truth what is but very few properly define the problem, the spiritual nature of it, the Satanic inspiration which has kept it alive for so many centuries God protects nations who want his protections, and leaves those who don’t to fend for themselves.  This story is repeated countless times in the Bible. Nations who follow God are protected.  Inevitably, they grow prosperous and gradually turn away from what brought them peace and prosperity.  Destruction quickly follows.   The story is told and retold countless times, with the hope that the reader can finally understand it.  Follow simple and basic rules, which prevent crime, corruption and societal moral decay.

If spiritual restoration occurs, then political restoration will have a chance of success. But God warned against voluntarily subjecting yourself to rule by humans, all of whom are corrupt and are sinners. (1 Samuel 8:11-18)
America must return to God. It was founded by people seeking freedom of worship, but has been corrupted by the same forces those people were fleeing from.

Once that happens, there are many things which can be done to remove the foundations of the political system for world governance:

Do not continue to participate in sham elections.
Communists are being installed across the world, against the will of the voters, using sham elections. These fake elections involve non-voters (non-citizens) being counted as voters, ballots from non-voters being mailed in, and voting machines with results that can be edited prior to submission.Immediately physically destroy all voting machines, and later ban them.It has been demonstrated many times that the machines can be easily hacked and votes changed, and more importantly, that final results can be remotely edited prior to submission.  When you vote on a machine, you forfeit your right to vote. Dont ask for permission from your local jurisdiction. Gather large groups of people and go and physhically destroy the machines. The Zionist press has recently made it clear that they are strongly in favor of property destruction in political protests for civil rights, so you should face no backlash from the press or the Marxist politcians.No right is more central to a free republic than voting.  During an emergency, passengers on an airplane are instructed to place their oxygen mask on first, before helping their children.  This is the most urgent of all the issues the nation faces. Nothing else matters more for the moment than restoring elections to the United States.   The rapid rise of the totalitarian Marxist state in the 21st century has not been a result of betrayal by elected leaders, but of the installation of traitors into important positions of power, through the use of voting machines.If the 2020 Presidential election is held on voting machines and by mail, the United States will cease to exist very soon after.  War with China and possibly Russia will be eminent, the Constitution will be suspended temporarily, (permanently) and the food supplies to most of the country will be cut off.   The U.S. will become a 3rd world country and the mass depopulation program will be enacted that the Zionists have openly declared and worked so hard to prepare.
Part of the reason for the COVID hoax is to prevent an election from being held, (and to prevent campigning and debating) and create an excuse for a sham election “by mail.”If the right to vote is restored there are many steps that can be taken to stop the Zionist onslaught.  The overthrow of hundreds of nations in the past 2 centuries serves as a guide.Mandatory voter ID, in person. No absentee voting, except active military. If you can’t make it to the polls to vote, you can’t make it to the polls to vote.
Absentee ballots are the second largest method of vote fraud.   Whatever the supposed merits of absentee voting were, they are far outweighed by the vote fraud potential.If voting is permitted without ID, there is no need for an election at all.You need an ID for a fishing license, or to buy a drink.  You need ID to vote in elections. Anyone opposing this, or claiming certain races or religions are too stupid to obtain an ID, is under mind control.
The results of allowing vote-by-mail fraud have been demonstrated.   Many Congressional seats were given to Marxists in 2018 using this method. 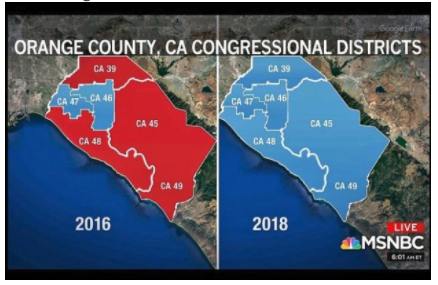